Being very young, my opinion didn’t seem to quite matter yet and I was not at all down with that. I found out soon I had a voice, it sounded somewhat embarassing, all squeeky and of very high notes but hey, I could bark. And I figured this would be the last resort to state my important opinions whenever I felt ignored.
So when I wanted to get/gain something, never mind what, it could have been just a simple glance, a quick pet or rub of my belly, … I would start putting on a show. You know, just to get some attention.
Usually I was laying on a couch, felt good there but for the fun of it I wanted to go down to stretch my legs and then back up again. Many times in a short period of time. A game very amusing to me. Since I was still too small I wasn’t allowed to jump up and down by myself so I needed help.
I would start by starring at Špela while she was working, piercing through her with the looks. So many times that wasn’t working. She was busy all right but I was needy, so I persisted. I told you, I’m a persistent guy. Nothing happened. Tried some piercing through again. No, still not working. Then I tried to throw myself around on the couch in quite dramatic manner. Still nothing. No reaction whatsoever.
I had to rely on my last resort, the embarassing barking. I started barking like crazy, no, no effect there either. At this point I was pretty mad already but I had to proceed so I threw a serious hissy fit .. and if I was persistant enough it would eventually work. She would come and put me down on the floor. Now it was a payback time for my performance that went unnoticed! I calculated with high precision the exact distance to the waterbowl, ran down the kitchen with all the force I could have and slid towards the waterbowl on the floor hitting it with my body. The water spilled all over the place but I obtained the result I wanted – I got all the attention I needed, she talked to me for a long long time afterwards :).
You know Robert Greene said ‘if you want any kind of attention, any attention is good, even if it is bad’.
It sure was my favourite game to play when I was very little. Until the times of Phases came along, I’ll tell you all about it in the next chapter. 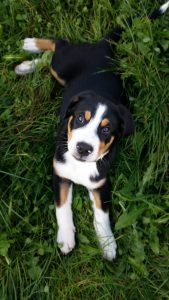 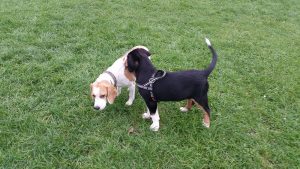 Beagle, shaved berner, great dane, rotty,… what the heck do they have to do with me?! Or “you have to see it to believe it”

Any cookies that may not be particularly necessary for the website to function and is used specifically to collect user personal data via analytics, ads, other embedded contents are termed as non-necessary cookies. It is mandatory to procure user consent prior to running these cookies on your website.